So what did you really think of the film Half of a Yellow Sun? 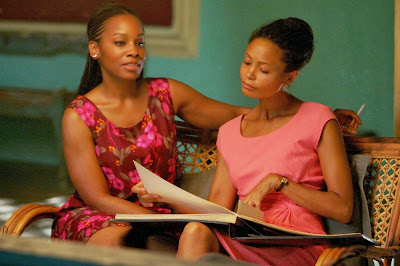 Even now as I attempt to write this post I’m filled with a sense of awful anxiety. I had missed pre-releases of the film and was finally glad for the opportunity to see it. The concession was that I’d be part of the Q&A panel. The screening, at the Tricycle Theatre was hosted by Images of Black Women as part of their Film Festival and marking their 10th anniversary. Prior to attending, I was unsure why there needed to be a Q&A, especially if it would focus on comparing film and book, which is always tenuous given they are often contending mediums. The intricate and ambitious narrative structure, well mastered by author Chimamanda Adichie certainly did not lend itself to an easy adaptation to a single film. The question posed to me by a young lady after the Q & A implied that I had feigned honesty in my responses. So the purpose of this post is to make clear my views about the film and perhaps answer this vital question.

Our pre-screening banter was brilliant in the foyer. Fellow panellist, Head of the Igbo Society in England Ndubuisi Anike, was well immersed in film and book; he had lost a grandparent in the Biafran War. He didn’t give too much away about the film, except that it really needed to be a mini-series – which he had suggested to its writer and director Biyi Bandele. That still didn’t prepare me for what turned out to be wholly disappointing. It is true that if you’re not satisfied with any artistic rendering then this is because you didn’t attempt to do it yourself and perhaps should and refrain from zealous criticisms. It’s easy to be critical of someone else’s work (positively or negatively) but the effort/attempt is ultimately their version and for this should be credited. And though I give Biyi Bandele that nod of appreciation for his effort, I must likewise recognise that not all efforts are brilliant or best.

So when I was asked – “What did you think of the film?” I found myself entirely constrained. What I had seen was completely unanticipated. Perhaps my expectations were too high, since the book is so brilliant. It is a wonderfully rich narrative that encapsulates and exposes a closeted piece of Nigerian history, overlaying it with multiple love stories. The central love story is between Olanna and Odenigbo, the film’s focus; but for me the film doesn’t quite capture the quality of their strained but true love. So in response to the question I expressed that I thought it an “overview” of the book. I knew that I was disappointed – actually frustrated – felt as though I was whizzed through something without the emotional sensitivities that the book so beautifully evoked.

Then there was something about “character motivation” which I know left me feeling gutted – because we didn’t get the time to develop any sense of who the characters were to understand why they were doing what they were doing. The presenter didn’t seem satisfied that I said the film didn’t have enough “time” to develop its narrative. But thankfully Ndu had the chance to make the point (as other reviews have done) that indeed there was just not enough time to do the book justice. It would be better as a mini-series. I recall that Andrea Levy’s book Small Island was well adapted to TV; it too had the structure of shifting character perspectives; it too featured multiple love stories against the backdrop of war.

The choppiness of the film reminded me of an extended trailer. We were given highlights that could lead to deeper exposition at a later stage. This exposition and character development never come despite excellent performances by the cast. Everything seemed sweeping and my emotions struggled to keep up. Chiwetel Ejiofor cannot be faulted for his grand performance – for which he gave everything. The revolutionary Odenigbo (his character) was reduced to a silly, drunkard, womaniser in the film. Hardly did we get the sense of his revolutionary spirit – the reason I might say Olanna falls in love with him. The cultural context of being a victim of his mother’s machinations that lead to him seducing the young girl Amaya is totally overlooked. Instead when he confesses that “he was drunk” to Olanna, the audience shook their heads and laughed. Moments before we were horrified by the shot of him having intercourse with the overweight, awkward village girl; moments before that we had seen him being suggestively kissed by Ms Adebayo (a colleague), played by Genevieve Nnaji. I didn’t understand the point of making him seem hateful, when in the book he was loving and sensitive; tender with Olanna when she became ill. 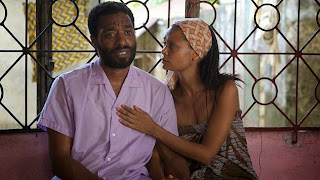 Though the casting of Thandie Newton has been deemed controversial (she is not Nigerian/is light skinned) she did a good job playing Olanna. Sometimes you could feel her confinement in the role, however, since the motivational sequencing was not always apparent (especially if you hadn’t read the book). I wouldn’t want to comment too strongly about her casting, perhaps only to presume it was expedient for marketing. However, I thought Thandie might have been a better Kainene, the hardened, skinny, business-woman sister of Olanna. This also because I thought Anika Rose was stunning – possessing the curiously termed “illogically pretty” and worthy of the metaphor of an unattainable river goddess – Olanna - with whom Odenigbo’s poet friend Okeoma was secretly in love. Thandie by comparison was pretty but seemed so plain. 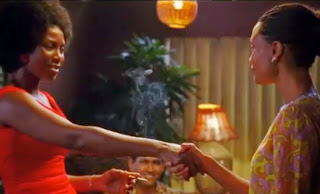 And I missed Ugwu. His character, one of my favourite and one of the book’s narrators was crucial because he was always seeing/hearing and responding to all the other characters in comical and yet sensitive/human ways. The film hurried his capture and conscription, evidencing the fact that young boys were dragged away from their families to fight in the war, but the report to Olanna who adored him that “he was killed” was cold. So too was the discovery that he was in truth alive, moments later. The extended trailer had twisted us one way, then brought us back without any sense of the trauma/experience that the book exquisitely renders to present us with the “emotional truth” about the devastating conflict. In the book, there was a conscious act to make the story multi-layered and told from many perspectives, including that of the “voiceless” as represented by the village boy Ugwu. Ugwu’s development is important as he becomes educated enough to both teach (during the war) and then write his own narrative about it, giving voice to the voiceless. Adichie cleverly removes the strand that it might be told by the novel’s official writer, Richard. It is Ugwu that acknowledges that the war was not Richard’s to tell. This was one of the best parts of the book but totally eclipsed in the film. When I say I miss Ugwu – I mean my Ugwu, which of course is part of the problem. The imagination creates the image of the characters that will always be partially represented in the medium cross-overs. But I didn’t warm to the film’s version of Ugwu at all – this is no fault of John Boyega who played the role. 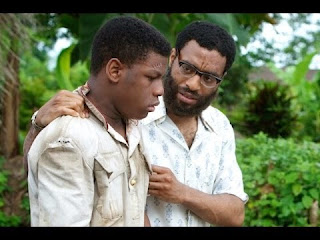 Indeed I regretted that I wasn’t as moved emotionally by the film as I was the book. In the opening scenes of the film the audience seemed to be laughing a lot; I shared in some of it, especially the undeniably superb performance by Onyeka Owenu, who played (Odenigbo’s) Mama. But the laughing mostly annoyed me; worsened the frown on my face. It was too regular, soap-operatic, as though this would be the counter balance to the forthcoming misery. That misery, actually horror didn’t quite make it. Yes, the airport massacre was shocking but this too was swept through. Richard, the bungling, awkward, outsider Englishman, played by Joseph Mawle didn’t get the chance to really reveal how traumatised he was at witnessing the brutal killings. So whilst the comedy was so marked in the first parts, the latter didn’t allow us to feel moved by the horrors of the War. If we felt moved in anyway it would be because we didn’t know the Biafran War really happened, that it is part of our living memory. Even when you read the book you feel cheated by historical amnesia; that Africa has so many hidden holocausts – this being one of them. Interesting to note that after the so called jewish holocaust, supported by Zionist there was the Nuremberg Trials, but after the Biafran war, nothing, The imperialist design of the British government under Harold Wilson of maintaining its interest in the region, an important part of the politics was glossed over in the film version of story. So too were the pan-African elements (where some countries like Tanzania recognised the state of Biafra) and the mention of the Civil Rights struggles (through Olanna’s African American friend). The bar that the now alcoholic Odenigbo frequented was named after Tanzania because of their support for Biafrans. The “trailer” effect also failed to capture the beauty and vastness of the Nigerian landscape. I think this was a lost opportunity to visually dramatise what the fighting was for at a cultural level –since in any case the economic/political motivations were brushed over in the film. 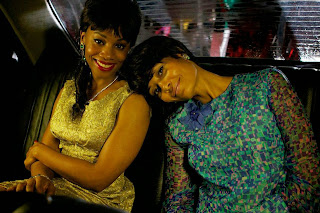 Our emotions aren’t forced when we’re reading about the war in the book – tears naturally flow as for example from this passage: “We never actively remember death,” Odenigbo said. “The reason we live as we do is because we do not remember that we will die. We will all die…But perhaps it is the whole point of being alive? That life is a state of death denial?” Here is Odenigbo’s breakdown (the reason he takes to alcoholism) about his mother’s death. But it encompasses the spirit of remorse that lends the book its humanising quality. It provides the nuances that blunt historical record/facts can’t quite convey. And this is missing from the film adaptation, though I believe it is possible to capture to some extent with more time.

Finally, if the young sister who asked me “so what did you really think of the film?” gets the chance to read this post I hope she will recognise that as critical as we are of it, we must be grateful that Biyi Bandele gave us the opportunity to see it. He wrote, directed, sought funding, asked his friends (one of them Chiwetel) to help him make it work. That in itself is a commendable achievement; hence the caution, the anxiety of going in hard about what I really thought about the film. That said there’s something more precious that was avoided under the pressure of the Q&A. It is the adherence to integrity without arrogance when providing constructive criticism, especially when the rebuttal might be “what have you done to tell our story?” Each point of criticism is exactly the reason why the film was an overly ambitious undertaking, and why it should have been/can still be a mini-series, if I am to revise my thinking that what I saw was an extended trailer. Although there is a sense of pride in knowing that Bandele so confidently took up the mantle for me it seemed somewhat ill-fitting.

Shout Out
Posted by waywivewordzspiritualcreative at 17:16 No comments: