‘Living by Maat’:Or Do Good and Good Will Follow 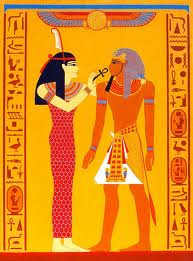 As a child I found the concept of this bearded white tripartite being/man (my “Father”), whose image I reflected and who lived in the sky from where ‘he’ randomly unleashed ‘his’ wrath, despite also being loving and merciful completely mindboggling. I mean, what did Isaac do? I argued a few times with my mum about this story of Abraham and poor Isaac. She tried unsuccessfully to justify God’s action to me; succeeding only to convince me that my head was not mine, but hers to chop off at God’s behest.

Equally perplexing was the concept of the Devil; God’s veritable opponent. Though all powerful and supreme, God still had an opponent? I rarely mused over the Devil’s other name of Satan. ‘Devil’ did enough to instil some kind of relative fear about the evil this equally powerful enemy of God represented. Though the etymological accounts of the words tell us otherwise, our third eyesight identifies their associations with ‘good and ‘evil’ by respectively extracting or adding a letter to each: good becomes God; Devil that which is evil. It was hardly instinctual to know that God would always outdo the Devil. The Devil being bad aggressor would always be defeated by God. Yet, it remained true that the Devil would never give up his assaults. The significance of this dualism couldn’t be grasped when I was a child. But in this spiritual game of life, to know God (good), one must also know of evil (Devil – signs of negativity as expressed in the previous Shout on Mara).

Good in this sense I associate with Truth (note the capital ‘T’) as an aspect of Maat. This Truth is something you know, rather than believe; it’s not something easy to learn, nor teach. It’s innate, intuitive or some kind of primal thing that springs from a clean – rather an unstressed heart. Requisite to ‘Living by Maat’ as the symbol of harmony, Truth, justice, social order and perfecting balance between good and evil is a clean heart. Though the idea of a ‘clean’ heart sounds biblically fanciful, I’m trusting most of you will recognise it as an expression, perhaps emanation of light. Seeds germinate in the dark; we’re formed secretly in womb space from a dark dot but realisation, beingness (becoming) is expressed in light. The heart, which is metaphysically considered to be the ‘seat of the soul’, must reflect light if it’s to be weighted on the side of Maat. Our deeds collect in the heart, some of them good, some bad. Our becoming depends on how greatly the good outweighs the bad.

Goodness then is a matter of expression that reaches fulfilment when we have mastered the balance between good and evil. Our heart must be as light as the Maat feather by which our deeds are judged at transition. When we’re stressed or depressed we are mostly in a state of selfishness. I don’t necessarily mean that literally, since we often don’t choose to be either. I mean that these are states of being within which our vision is blurred, we don’t see outside ourselves because we’re in our funk. At this time the world is about us and how we’re feeling. An unstressed state or one of good levity enables us to see and think clearly; our heart is unburdened. Depression, stress, selfishness, lack of forgiveness, self-hate, bitterness, arrogance and so on are states of being that burden the heart, contaminate the soul, reflecting the darkness or bad (read Devil). Contrastingly self-love, selflessness, generosity, compassion, humility and forgiveness etc make light the heart and nurture the soul, reflecting good spiritedness (God’s image/likeness; our expression of divinity).

Perpetuation of our funk is the weight that burdens our heart and follows us into eternity. Our perception of Maat, how we grasp the dualism of good and evil (God/Devil) will determine our mastery of self. To achieve it would make the meeting with Maat mellifluous; our transcendency would manifest in a glorious blaze of light. The alternative would be like that dream of walking along a never ending dark corridor, either end seems equally long, you’re unable to decide whether to go back or to continue forward; either way it is the longest walk. Our only company in that state is the weight of our funk chained to our necks for eternity. The light of our heart is something we cultivate not simply through acts of goodness but as something we express in our being. I suppose one meaning of I am that I am can be deduced from this: I am that which I express. And if I am the image of good that is the divine expression by which I am perfected on my journey of becoming.

Shout Out
Posted by waywivewordzspiritualcreative at 14:12 2 comments: