Eulogy: Mrs Washington You Got Witnesses 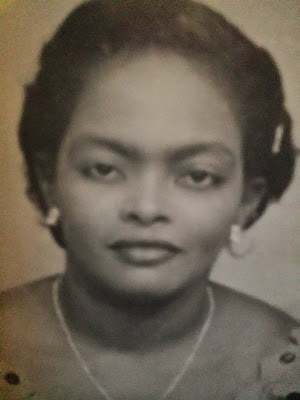 She was struggling with a shopping trolley just near Brixton Station. An elder woman, on her own, doing her shopping. She looked weary but determined. I was handing out flyers. She reached for one and I became curious that she was on her own. Where are your people, I asked her. She said her son lived in Kent, I can’t recall what else she said. We got chatting, I picked up her Guyanese accent. She sounded a bit like my mum and my mum’s friend Ms Monica – an old time Guyanese - a kind of sing-songy poshness and vibrancy.

She stood with me for a while - said she would like a massage one day. Sure I said, thinking it won’t ever happen. She began telling me a little of her life - particularly her trials with men - distrusting all of them – and firing "effings" here and there - as she told her stories. I tried hiding my shock! She seemed to be enjoying herself knowing she was surprising me, commanding my deepest interest.

Nearly a year later, I received a call from her. Mrs Washington - Ivy, she said. I had the feeling I was expected to know who she was – as if she was a “some body” – the “Mrs” title was never removed though I realised later she had been divorced for several years. She wanted that massage after all! Wow – was my thought because she was pretty robust, high large buttocks like that maid in the Tom and Jerry cartoons - her legs where she wanted the massage were thick. 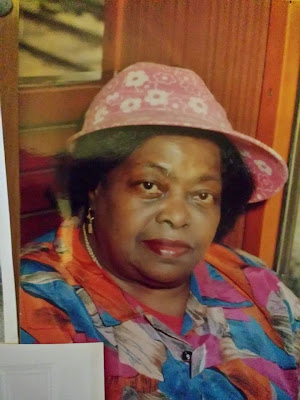 The massage didn't happen. A surge of relief! But we became "friends." I learnt that she lived alone. The massage might have been a rouse to get me there - she really needed company - because those unbelievable numbers of fridge magnets, ornaments and every kind of random collectibles –those old time plastic tropical fruits, she blended with real ones and tricked you by asking if you wanted one - could only satisfy her loneliness so much. Oh she had dancing animals, singing teddies, illuminating angels, images of white Jesuses, but a black one somewhere too - pictures of her myriad trips abroad, and nuff postcards to complement. Her home needed to be on one of those decluttering programmes. It spun my head! But how she loved these possessions that some of us encouraged her to part with if only to give herself space to breathe.

Perhaps it was in a bid to see her in a clear, more tranquil space that over year ago, some months before the fall I dreamt the house was completely decluttered – you could see the floors, no carpet just plain wooden floors, blank walls upstairs and down. Mrs Washington, I said in the dream – you’ve cleaned out the place, it looks lovely. There was light coming through the windows – the house looked calm, she looked at peace. I told her the dream and she said it was good. 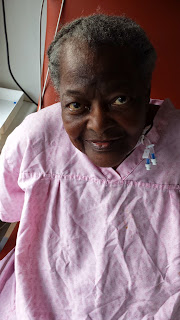 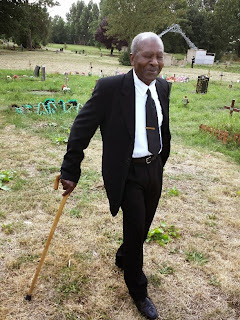 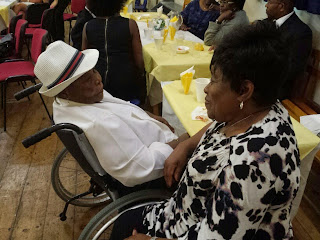 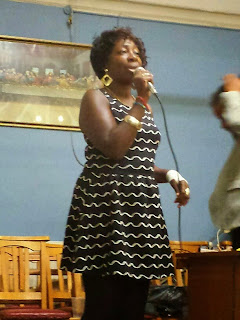 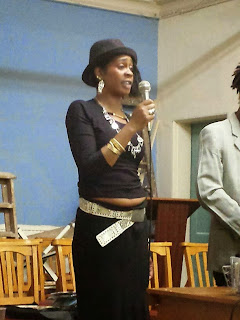 The dream must have been a sign of her demise, her spirit preparing the way for a final journey. Her survival from the fall – having been found four days later by neighbours - reaffirmed the powerful, strong, woman she was. That she should face that kind of trauma and pull through, come back with the fighting triumphant spirit we adored her for was phenomenal. So amazing it fooled us into believing she was invincible.

She was always so lively, though crying out for the pains - yet acknowledging her mouth to be still strong. She pulled you into her laughter – sometimes with her own jokes other times by showing you one of her performing animals that delighted her so much. I became drawn into her world, loving her as though I’d known her all my life. It turned out that she knew my mother, Lucille, they shared a best friend in Mrs Monica Wisdom – sisters of Unity a self-empowering brand of Christianity.

Mrs Washington was truly fascinating. She was so proud – had a magnetic personality. Her brand of life affirming expressions I’m not sure we can truly appreciate. She was sometimes very suspicious of people; was intensely protective of those possessions, perhaps precious only to her – none of which she could ever take with her to her final resting place. 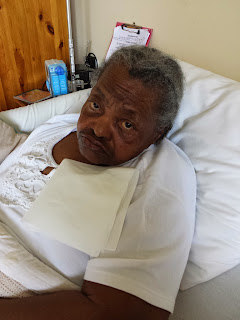 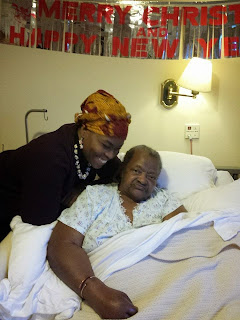 The last year had robbed her of life, that vitality she used to give political commentary – she often filled in the gaps in my awareness of current affairs. The stroke shocked us and eventually left her in a deathlike state looking with sad lonely eyes through the window - no longer communicating as she had been (then there was minor recognition and sometimes even speaking). Last time I saw her was a few months ago on her birthday in April. She looked so cute - but there was a sign of finality - the demise clearly imminent. I needed to know precisely how old she was – and attempted to write down a figure and see if she would confirm or deny it to be her right age. She just looked at the paper (somewhere in there I thought she was thinking – “wha’ really wrang wid dis geurl.”

Her only child, Desmond later told me she was born in 1929, making her 85. Like many of her generation who came from the West Indies and Guyana, Mrs Washington arrived in the UK full of expectations of a better life. I once asked if she’d ever returned to Guyana – “when yoh come out da gutter wha’ sense it mek going back,”she said seriously. I tried not to feel offended. She was a grafter, was always blessed to find work. I don’t think this was down to her skills alone – I imagine it was also because she was a stunning film star beauty who simply charmed anyone who met her. I loved those beautiful black and white photos she had of herself in the house – particularly the one in her wedding dress – her husband nowhere in sight – just a gorgeous young woman poised to take on a new life. 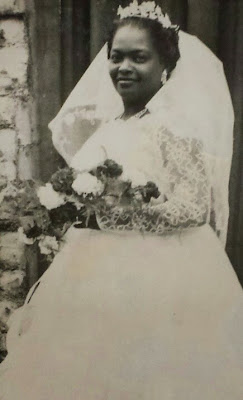 But it was the hard work and sense of enterprise, the spirit of the time she came here that made it possible to buy her home in Brixton. Oh this was her ultimate achievement – her life and soul went into that home. It was an absolute pride, a joy to know that after great struggle she could declare that it was bought by the sheer hard work and determination – along with remarkable thriftiness. I listened to the story over and over. One had to. And respect the achievement. Her next achievement for which she was proud was sending for her son to join her in England. But she was the kind of woman you couldn’t help adopting as your mother. She embraced people. She was an icon on Medwin Street, having lived there for decades and well known to everyone who might hear her mouth before they saw her slow strutting with her trolley.

She had an independent spirit. We can all attest to her stubbornness. And her strength she owed to her God, whose name she never stopped calling. A lot of prayers went with those colourful curses with which she introduced herself to me. Everyone knows of her generosity, the charitable attitude she had of always giving. There wasn’t a day I visited I left empty handed – no amount of courteous refusal was acceptable. She always tried to get me to take these incontinent pads – she had a stash of them – for my mum – or just to send back home! It’s ok, I’d say. But the offer was always there. And she got extra medical supplies (random tablets) she thought they could use back home in Guyana. Her crazy extended to odd things she bought from the £1 shop, often insisting I take them; would look almost insulted when I refused. So I'll keep the three kitsch cups because they'll remind me how happy she looked when I accepted these strange but generous "gifts." 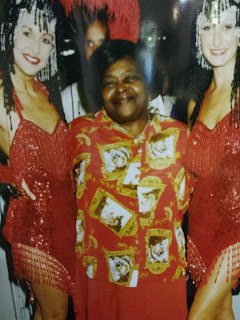 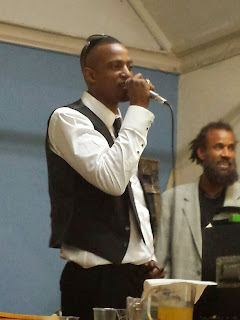 I loved her craziness - marvelling at her all the time. For different reasons - like why she held on so tightly to things – physically and mentally. Wondered when she would ever let them go – be resigned to quietude that comes with releasing. Or the way she had reached that elder's state of repeating stories as though telling you for the first, maybe second time. Or the fact that she had overcome burdens that would defeat many others, bring them down. But her laughter was always so vibrant – attesting to her spirited embrace of all the changing scenes of life.

She didn’t take her health issues as seriously as she should have. I felt gutted each time I went into KFC or Speedy Noodle on her request which I always felt obliged to fulfil. She hid the severity of her health problems – major ones like diabetes. The oily food, sweets, biscuits, crisps - especially quavers, she craved gave her childlike pleasure but was so contrary to her good health. That last time I saw her I had a sense would be the last. Prior to this my goodbyes were met with a familiar “okeydoke.” I had whispered to her that she had had a great life - there's nothing really needed here for her to keep onto. I told her I loved her. Told her that she had travelled to more places than I could ever dream of seeing. But she would encourage me to dream big, aim high, and tell me well done when I mentioned an achievement. I told her she had worked hard, despite serious obstacles, persevered to own her own house. I asked her to look at the camera, and smile because it was her birthday. The eyes looked up, the old time beauty yet proud to face the camera, but she looked so sad signalling the bittersweet sorrow we would all share at her passing on Saturday 19th July. 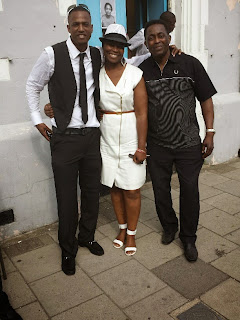 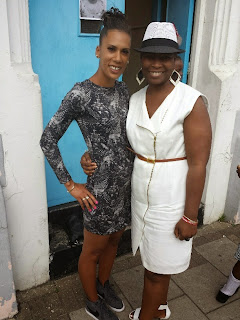 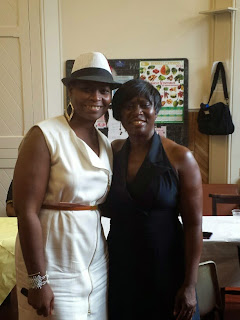 Mrs Washington often spoke fondly of her grandchildren, I recall Jason particularly, whom she said would always bring something for her. She leaves behind her sister Waveney, brother Dennis, Desmond her son, other grandchildren, Paris, Craig, Samar, Jonathon, a niece, Joan, nephew John; many friends, she always said Sister Monica was her best friend, neighbours, church family and people in the Brixton community who knew her. You will be missed by us all, Mrs Washington - witnesses to your enchanting, exuberant life. Our thanks to the nursing home in Kent where she passed away – when I visited she looked well cleaned and cared for by the staff there. 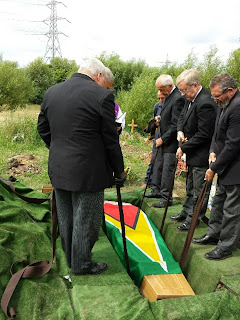 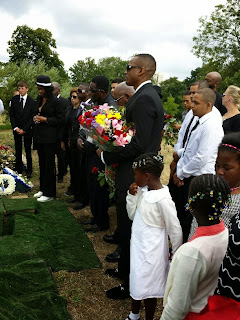 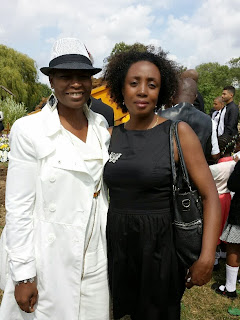 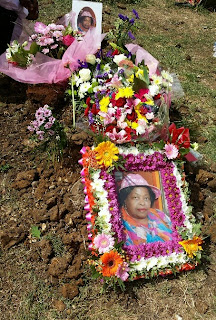 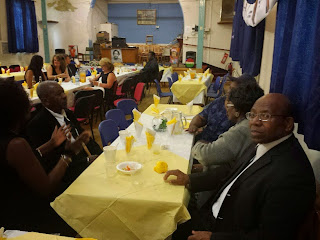 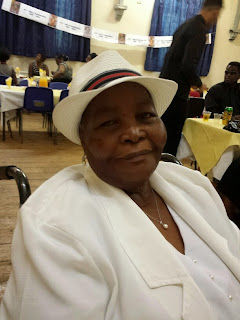 She went splendidly with the thunder and rain - her spirit beginning to travel in the resounding claps a few nights earlier. With the daytime blazes of the hottest days and nighttime pounding of the rain gods, she made a striking entrance through the eternal gates; casting off stick and ailments to sit at the Master’s feet and rest. With delight she lifts up her heart, finally free, finally ready to let go and make the journey home to abide with her ancestors. We salute you Mrs Washington - thank you for claiming us as family, and me as one of your daughters. I looked for and saw your vital force in the rainbow on your nine night - signalling your majestic transition, that you too could manifest in the elements if there is anyone to bear witness. Stride aloft My dear Mrs Washington because for you this tiring trod through Babylon is at last over - mount Zion is now your new, eternal home. 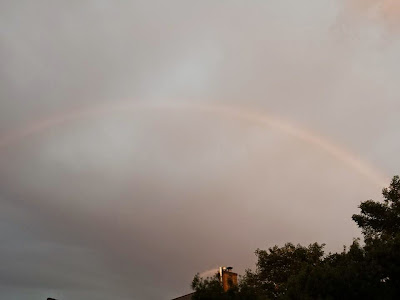 The rainbow, splashed on Mrs Washington Nine night. There was only spitting, it was near night - but the vital sign was there.