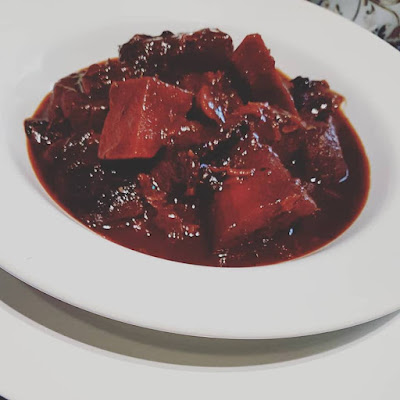 I’m sharing this following my facebook post bigging up this version of the traditional Guyanese dish. A few people wanted the recipe. The idea is not mine. But once I learnt it was possible to enjoy this seasonal dish as a vegan I've made it ever since. In Guyana, vegan/vegetarian pepperpot is made with soya chunks, which is how I used to make it but I don't like too much soy products in my diet, so I prefer to use ground provisions. Rastas call it Ipperpot – which I’ve not tasted, presumably it doesn’t have salt in it, making it Ital(perpot).

I’m rubbish at measurements and sticking to any recipe! So I’ve cheated and found items from a meat version, adapting so you get the idea and of course I’ve substituted the meat for the ground provisions.

Selection of provisions to include:
Sweet potato (say 2 medium sized), Irish potatoes (about 2/3), cassava (half a large, or 1 small), yam (I use puna, so which ever you prefer - half large), green plantain (a large one), green banana (2 small or one large), eddoes (about 2-4). Cut these into small chunks to your preference.

NOTE 1: if the consistency isn’t thickening, which it should with good cassareep, I usually mash up some of the Irish potatoes and/or one of the eddoes.

1 cup cassareep (the ‘cup’ thing depends on the quality of the cassareep – aim for one that is authentic - I know I know – but the one I used this year came from the POMEROON – hurray…and was fab!)
Mushrooms - 1 punnet of oyster mushrooms, a half punnet of chestnut mushrooms. You can also use a few dried ones. Cut them in halves/quarters depending on their sizes
2 cinnamon sticks (again, this will depend on how seriously the sticks smell of cinnamon as the spice is important – you should get its aroma. In mine, I add about 3 large good ones)
Orange peel (as the season approaches get quality oranges – yes ortanique have fab flavour – cut in squares to keep the peel. I use the whole skin of one. If you don’t have great
About 4 cloves garlic (chop finely)
4 wiri wiri peppers (cool if you have these, which are from Guyana and usually kept whole . But I use 2/3 scotch bonnet ones – you can go hotter – chop finely after removing the seeds)
1/2 cup brown sugar (I used the soft dark one)
1/2 tsp salt (or to your taste, you can add stock cubes too – vegan of course)
8-12 cups water (be flexible, obviously you might have to add more, but start with less than too
Few sprigs of thyme (about 3/4 tablespoon of crushed fine leaf from Guyana is my preferred)
Sprinkles of Black pepper (as you would any other large pot of stew)
6-8 cloves (some keep this optional, but I like them - though it can be annoying when one lands in your mouth!)
2 small onions
2 spring onions
2 Table spoons of coconut oil (or as you prefer) 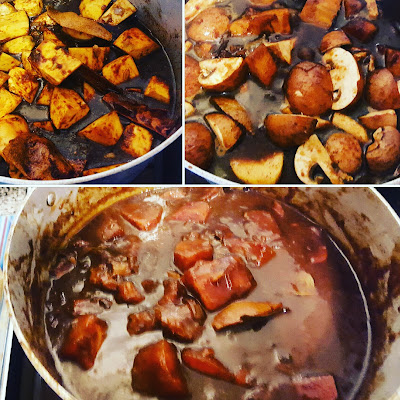 This picture is from last year to show you the process

Process
• Heat the oil in a large/deep pot
• Saute all the onions, garlic,
• Then add all the other ingredients, leaving the water till last. B
• Bring to a boil till the provisions are soft and edible.

Note 2: Check the consistency, which should be thick, not like molasses but not runny. Check the colour, it should be deep and dark. Taste should be hot, sweet, bitter, savoury, spicy (cinnamon, cloves, orange peel should be strongly hinted) all at the same time! So not too much of either. The smell should be distinctive especially of the festive spices. If you know the meat version, your aim is to mimic this.

• I remove the cinnamon sticks, orange peels and if you used the big sprigs of thyme (instead of shredding) remove these too (some fastidious folk can’t deal with picking them out of their plates when served – no names given up!)

Note 3: I cooked this couple days before Christmas. When I reheat the provisions don’t crush up so don’t worry about this happening.

I think that's it! You’re good to go. All you need to make this extra special is the homemade bread. 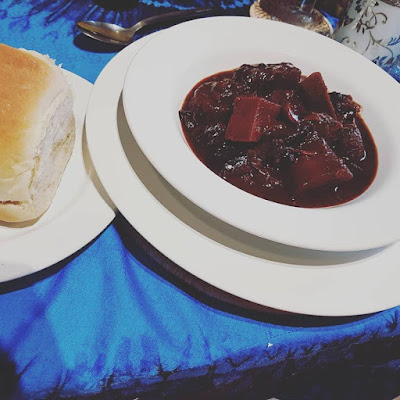 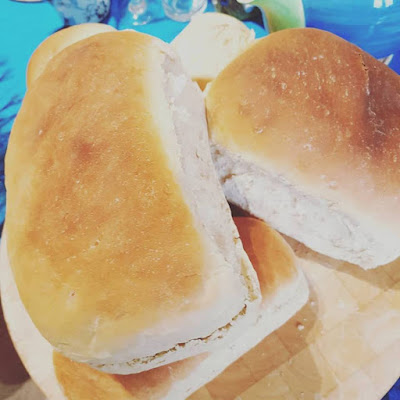 Shout Out
Posted by waywivewordzspiritualcreative at 20:55 3 comments: