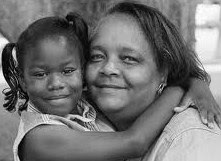 Its run at the Arcola Tent ended on May 26th but the success of Ade Solanke’s Pandora’s Box no doubt means there’ll be further opportunities to see it. Positive reviews ensured the nomination for the Best New Play for the ‘Off West End Play Awards.’ Powerful performances by the cast, each confidently and superbly owning their part also credited the play’s success. Smooth scene shifts and timings ensured the audience experienced complementary doses of humour and seriousness without need of intermission. The character (Baba) played by Olatunji Sotimirin commanded our attention with his at once comedic and critical commentary about contemporary Lagos as an alternative to London to where many Nigerians (and other diasporans) still aspire for prosperity.

Reviews of the play have focussed on the tough decisions mothers/parents have to make about their children’s education and supporting them to realise their potential. The Play’s backcover features Dianne Abott describing the added complexity of race and culture that impact the educational choices made by black parents. And it’s true – the play is ‘poignant’ but I don’t think for only the reasons these reviews highlight. My latterday consideration is not intended as a further review. But despite the reconciliatory embrace by mother (Mama Ronke, susan Aderin) and aggrieved daughter (Sis Ronke, Yetunde Oduwole) at the end I left with a nagging sensation that there was a further layer of complexity that wasn’t the play’s focus but I feel need to be addressed. Overstretching myself meant that I didn’t have time to do it earnestly after seeing the play and thought the feeling might go away. Though it has been over a month the sensation hasn’t left me so I’ll use this Shout to see if I can release it.

Deep down we want the happy ending, to believe that we can embrace away emotional trauma. Opening Pandora’s box – evoking untold histories, hurt, trauma – in this case the misery and memory of a mother’s decision to leave her eldest daughter behind when she journeys to London. The mother’s reason for so doing? Economic freedom – to study in London which she hoped would ensure a better life for her family. The fact that Mama Ronke felt it necessary to leave Nigeria and go to England subtly reminds us of the manacles of colonialism and imperialism at the heart of the search by many Africans for economic opportunities elsewhere. Many of us in the Diaspora know this story. Let me rephrase– many of us can relate to the trauma of this story – hence the poignancy spoken about earlier. While many of us can relate to the trauma, very few have experienced reconciliatory release from it. 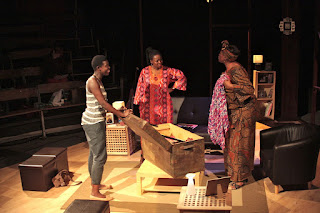 I shouldn’t have been surprised that the audience were urging the second generation mother, Toyin (Anna-Maria Nabirye) to repeat the history in reverse. The play centred on her making the decision to leave her son (Timi, Bradley John) in Nigeria where she too hoped for a better life for him, away from the perils of London’s streets - a particular reality for African boys. Before the discovery that Timi has posted images of him posing with a gun on Facebook, I sense that the audience had already concluded that a better chance - not simply of life - but of staying alive might be experienced in Nigeria albeit with the militant Principal Osun (Ben Onwukwe) at a prestigious boarding school where discipline and learning are strictly enforced. It could be said that my surprise at the audience wasn’t warranted – for a boy’s life was in question. We had been given the context of friends who had been killed in London. There was another youth experiencing the rigours of the boarding school (Tope, Damson Idris) and though missing the materialisms of London street life and the closeness with his mother, he was advancing his studies, mastering a new language and embracing his ancestral traditions. So if Timi’s life could be spared and he could advance himself culturally, educationally and socially with a few accommodating lashings – then what’s the issue.

Yes – his life might be spared and he could emulate the success of his aunt (Sis Ronke) but the nagging sensation, which I think highlights the play’s poignancy is that Timi might never experience the mother/son reconciliation that the play projects between Mama Ronke and her daughter. The play serves therefore to challenge many of us who are burdened with this traumatic consequence of our mother/parents’ decision to leave us behind.

Sis Ronke is bitter. She’s jealous too of her younger sister Toyin (born in England) who had the opportunity to grow up and bond with her mother in a way clocks cannot rewind to make possible for Ronke. Nor can Mama-Ronke’s box of stored-up dresses and dolls she hoped to send for her daughter. At least for a time that’s how the play engaged us – that there was no imminent reconciliation between mother and daughter. But the play was not pitched as a tragedy – it was placing experiences and perhaps in satisfying the quest for catharsis and healing it provided a vision of reconciliation.

But I wondered about those hushed up sensitive experiences that many of us endured when we were left behind – or in some cases were the reasons why we might have been sent back or sent away – anywhere where the ‘problem’ might also go away. Very few families in the Diaspora have been spared this familial disruption which has caused and continues to be the cause of major rifts between its members. Siblings permanently vexed with one another because one or two thought the other/s had it (everything) better because they had mummy and daddy or mostly mummy; mummy sticking hard-heartedly to her reasons for leaving without credible consideration about the consequential trauma experienced by sons and daughters. In my experience fathers often escape the emotional tussling in this family drama. When I speak here it’s directly about my mother’s decision to leave me behind, which is not to absolve my father of his share in that responsibility. That I’ve elsewhere addressed.

But what is this ‘problem’ I’ve alluded to. When some of us are walking with the misery of our mother’s leaving us behind it’s because we are trying to come to terms with the reality that we were unprotected from the so called uncles and aunties who preyed on us sexually and levelled all kinds physical abuses against us. There was no one to talk to about it – brother or sister was enduring their own tortures (if they were left behind with us) and too scared and too young to protect you. I know this isn’t everyone’s experience – at least not the abuse – but the feeling of being ‘abandoned,’ left to the possible wiles of relatives or ‘family friends’, developing the sense that your mother/father never loved you or that they preferred the London born sibling/s is source of the pain those children left behind have stored up.

At some critical moment in our lives we might feel urged to speak to our mother (after being granted our indefinite leave to join them and remain in England) about these abuses but what might be their response. Do their eyes meet ours and say “sorry” or express some understanding of what we’re trying to explain to them? Do they - like Mama Ronke express that they left us for the best possible reasons? Do their eyes mostly shift in disbelief and some kind of measurable portion of shame? Shame that their trusted relative, brother, sister, sometimes mother took this unspeakable advantage of their child. Unfortunately that mother’s memory might evermore deny them the critical objectivity to say they left because it was opportune – not necessarily for betterment but wickedly for fashion. In other words the Joneses were doing it so like them I wanted to touch down in London, become graceful and look down my nose at the unfortunates left behind. And in that vainglorious scurry to clean up London’s streets I didn’t contemplate what possible harm I was subjecting my baby girl/boy to. Again – this will not be everyone’s experience. My point is that sometimes the reasons our mothers/parents made the decision to migrate to London have nothing to do with the search for economic freedom – not seriously – but it was at the time ‘en vogue.’ 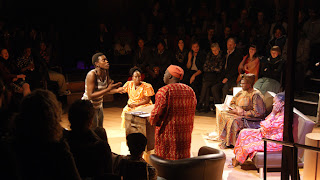 When faced with the reality that you suffered abuse as a consequence they might force some kind of rational explanation for making the decision. Sis Ronke’s life is successful but who does she thank for it - her mother? Nigeria? Her grandmother whom she remained with? Herself? And if her life was not measurably successful who would she blame for this? Her mother? Her sibling/s? Her abusers? For how long will she adulterate this trauma? For ever? Or will she find a way to take charge of her life and recognise that she is alive; she has survived; she is the maker of her own opportunities, that she is in command of the directions she wishes her life to take - that ultimately clocks wind forward.

Whatever way we imagine or interpret our mother/parent’s decision to leave us behind we need to reach a conclusion (the closing of “Pandora’s box”) that will release the long-held trauma. It’s likely to be the cause of many unfathomable disputes between us and other members of our family. We might hope for our mother/parents to say it was a mistake, but I’m not sure that would give us satisfaction. We might dream they would believe us that we suffered abuse and then perhaps confront our abusers but their shame and sense that they failed us might remain unexpressed; except for those rare moments when it leaps from their eyes or juts from their mouths in some sudden attack on us because they do not understand that secret pain at the back of our eyes.

One thing we must avoid is conscientiously and steadfastly holding that decision against our mother/parents. We must try, however difficult, to position ourselves in their place. If self righteously we feel we would never leave our children behind perhaps we should contemplate Toyin’s dilemma. We cannot be too confident about what will force us to make certain choices but when questioned by our conscience and our children we will need to say that at the time we made the decision it was in the best interest of our family. We need to be able to embrace our child and say softly “darling if I’ve wronged you it was not my intention.” We need to simply say sorry when we see that hurt in our child’s eye because they may never find a way to speak of the reasons why your leaving them was so painful. The decision may have been sound for you, but the consequences unbearable for your child. Reconciliation works in multiple ways. If entered into with the desire to be free of festering experiences there is no lonely winner; all are relieved and perhaps then the lid of our Pandora’s box will be slowly and gently closed. 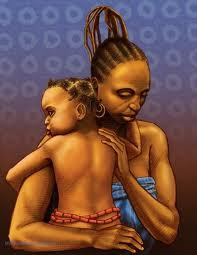 Posted by waywivewordzspiritualcreative at 12:15 No comments: