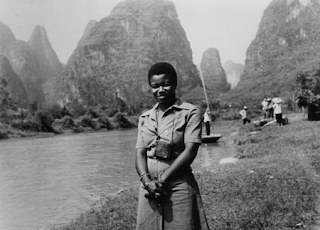 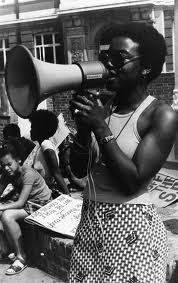 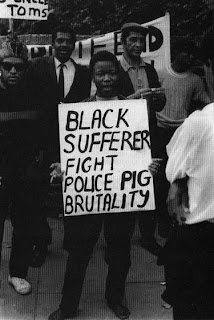 Rippling my miserable
mediocrity
compelling me to rise
from sleep’s wanton
inactivity
to talk much less
and for god sake do
something.

Certain admissions are woefully embarrassing. But the honest heart must attend to them in some way or other. Must be nearly two years now that I’ve had a picture in my house of a sister I hadn’t until now attempted to know. So why is she on my kitchen wall? She must have put herself there – at least spiritually. I did the physical action of printing it out along with other pictures of Black icons in the seventies and laminating it - this was for a ‘decades’ party I was having. After the party I kept her there – not through any kind of laziness – she just seemed to belong. She’s smiling beneath Marsha Hunt – ‘big fro... lil fro warriors’ is the caption I wrote. I didn’t even find the picture myself. A sister emailed it to me saying, ‘I had to forward this to you as Olive Morris and you so resemble...it’s a good resemblance to have as she was a warrior sistah,’ My reply was ‘thanks. My skin’s crawling.’

Spirit knows the significance of vanity on a feeble conscience. But it’s always a matter of time before the divine purpose of a connection is manifested. I didn’t take time to look for Olive. It seemed enough to parade her on my wall, utterly pleased at the physical resemblance. People would ask, confusedly, if it was me they were seeing. And I wouldn’t properly reply, I’d giggle - idiotically almost, basking in something I didn’t comprehend. Who was this woman? If they asked me her name, I really couldn’t say. I didn’t feel embarrassed that I couldn’t explain who she was; that I didn’t consciously register her name after being forwarded the email. The resemblance seemed to me to say all that was necessary. How shamefully wrong that was.

After the last Shout, which privileged three brothers it’s as if I felt her spirit straining for some of that – or the same. What about me – she was saying. Don’t forget me. The picture on the wall began to take on new life, pressuring me to look for, not simply at Olive. The purpose of those two years hence connection was manifesting. How many times had I driven past that building in Brixton where she has been memorialised? But on discovering this, something still bugged me about how little she is known. I don’t know if I’m saying that the building isn’t enough or whether there’s something too silent about it – maybe something missable as well as missing there. Online entries about her note unspecific birth and death dates – ‘1952-1979’. But when exactly? I needed, for some yet unfathomable reason to know the precise dates. I kept searching but every entry was thus limited and it annoyed me. I know the annoyance was probably more at myself for my belated interest.

I determined to visit the Lambeth Archives where I was sure I could find her exact dates of birth and death. That place – which houses archival material about Olive – was snaky to find. My heart was drumming as I drove round and round, knowing with each mistaken turn (no sat-nav in my beat up banger) that I was so very near to finding Olive. Once there, I was overcome with that satisfied feeling of achievement. The effort mattered. Two boxes – one they couldn’t find without some tumbling up – held images and recordings of a life briefly lived. My eyes lit up – this seems pathetic now- when I noticed a passport because I was determined more than anything to know how specifically brief that life was. Olive Elaine Morris was born 26th June 1952 and died 12th July 1979 after completing almost exactly 27 years of life. I breathed.

The life was brief but full. It expresses that utmost urgency of spirit that is beyond the weights of gravity. She was on spirit side from time and so utterly fearless. That’s what we see in that barefooted feature – some spirit up in the face of human oppressors. The warrior weapon is her voice – an unbounded one – whose pitch and dramatic soprano held accented Jamaican notes. The adorable lyrics of that line crucially said everything about what she meant. How do I know how she sounded? It is simply that the loudspeaker is still sounding: ‘stop police Nazi activity in Brixton’ shouts from one of her flyers. The leaflet highlighted the systematic harassment of Black youths in Brixton following one of the many Notting Hill Carnival riots. That harassment persists in differing signs.

One of the photos in the archive - and there are so many that depict snatches of a full-on activist’s life – is particularly grievous. It is 1969, Olive looks mashed up – you can see the ashy skin even though the image is black and white. You notice still a troubling smirk escaping despite the ordeal. She looks much older than 17. The picture was taken at Kings College Hospital following a police assault. At the back she found it necessary to inscribe “taken at about 10pm on 15th Nov ’69 after the police had beating me up.’ You’ve read the verb correctly – that’s exactly what she wrote, ‘beating...’ Why struggle to find the past tense of a verb for which the action is perpetual.

Yet there's an image that delighted me – made me smile someplace surreal - one where Olive is up in the face of two policemen. The veins in her neck are straining as if she’s attached to invisible chains pulling her in the opposite direction. A white woman is watching, as others are, stunned, silenced by this warrior’s unrelenting will.

On 14th March 1986 she was honoured with the naming of Olive Morris House in Brixton. You will have passed it many times. But I don’t think that if you’re now compelled, as she has made me to really look for her that’s where you need begin. Spirits don’t remain where they’re buried - in cold coffins and tombs. Memorial buildings tell you that they’ve once lived but hardly say for what and how. And if you’re really curious to know why so brief the life and for what purpose it came, perhaps you’ll have to be ready like Elisha when Elijah was mystically caught up and had to leave behind the prophetic mantle.

Shout Out
Posted by waywivewordzspiritualcreative at 07:39 2 comments: