In search of a spiritual muse: awakening the God/Goddess 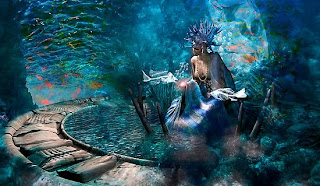 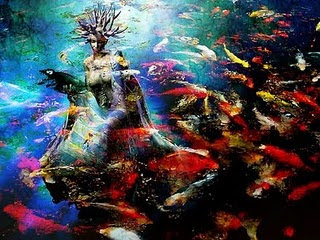 The search must be sincere and profound; the spiritual querent committed to the simplest or most extreme demands of the outcome. There is a still space within each of us that can be accessed in the quietest moment of contemplation. When we have stopped or at least paused long enough to tap the interior door of consciousness. To avoid psychical meltdown, consciousness requires this slowing down, pausing or stopping to advance us spiritually.

This meltdown manifests in various ways relative to current social deprivations and depravations. Depression, psychotic breakdowns, spiritual and cultural vacuousness are subtle forms of a kind of madness caused by an imploding society. An example of what I mean – we were told earlier this month that following “actionable intelligence” of his whereabouts US Special Forces killed Osama Bin Laden and to respect his Islamic tradition buried his body at sea. “Justice had been served,” President Obama reportedly said. Was this assassination a judicial practice? If there was so much respect for Bin Laden’s Islamic tradition why was there such disrespect for our perception of justice?

Now - if you faithfully believe in the system, in the literal meanings of things; that all alleged criminals had to be given a trial because not only the Law but humanity dictated it, how do you respond to this blatant violation of said belief? You are expected as if it’s a movie to suspend disbelief whilst staring mindbogglingly at a released image of Obama apparently watching the ‘unfolding mission’ of Bin Laden’s killing. But this is not a movie and that vital suspension of disbelief – if you run with that course- precipitates the onset of madness. No amount of headscratching can explain what you’re seeing, what you’re hearing. It’s befuddling and you little realise that you are caught in the matrix of insanity. If, however, spirit forces you to acknowledge that what you’re seeing/hearing is madness and you fight it you have missed a real opportunity to advance your spirituality.

A kind of madness is also evident in that reluctance by some of us to realise that Obama’s complexion does not make him less Capitalist or Imperialist. He is seductive because he’s not dumb sounding, nor seeming like Bush but his intelligence alone should never have been trusted. He was never my Messiah because I am not looking for one. To hail him as such is to voluntarily imprison my spirit and thereby relieve me of the profound and sincere responsibility of the search. That profundity is necessary because my spirituality is not a wilting modicum that is satisfied by religious dogma, zealous Sunday sermons or masterly political orations. Obama is a ready-made muse, a sort of accessible one-for-all, with that smile that charms (if it yet does not sicken) and those words that mesmerise (if they yet do not frustrate). The seduction was easy because as Africans the familiar messianic trap (from the time of the Maafa) was thrust before us – some God is always descending, expected, arriving from outside of us to bring light and lead us out of our miserable darkness. And now that many of us accept that the white image is untenable we look for it in the black. What is transferred is the belief that our salvation is the responsibility of someone other than ourselves. When they deprive us of this what is our recourse? Some of us will never reach the point of asking this question - so steeped are we in the matrix of insanity.

The serious querent searches because the spirit is tired of the mirage and its psychic grasp leaning you toward meltdown. They know there is more to Self but are not certain what it is. In one of those pauses when the still space is accessed the spirit speaks. The language is not complex but it is intuitive and might only point to some unexplainable notion, some vagueness of thought that we need to engage further when we return from that still zone. We cannot remain in that zone, but we’ve dipped in long enough to touch something or be touched by something that requires a further push. Presently it is superficial – the spirit is weary that the querent might not be ready for the fullness and withholds the totality of potential mystics. Some of us remain at the initiatory stage – that first touch- because the push toward the deep already reveals too intense a commitment –it feels more like a pull; like some greater, invisible force directing your movements counter to your will. But the push, your giving in to spirit, affirms your readiness for the depth of revelation.

It is not always possible to identify how or why the search began. Sometimes it comes at the end of something – or at the point of its rupture. Trauma can force us to the interior space we’ve avoided all our lives. A feeling of disempowerment or realisation of spiritual deadness might be the catalyst but whatever the reason once we’ve embarked on this path we should keep journeying towards that fulfilment. For now the God/Goddess is awakening. Spirit might reveal, as an example, this God/Goddess to be the dual principle of Yemaya Olukun. Yemaya, contracted from ‘yeye emo eja’ – meaning one whose children are like fishes, in Ifa represents the Mother of creation, Mother of the Ocean, the symbol of motherhood and fertility. When paired with Olukun this becomes a deeper expression of a power that resides at the bottom of the ocean. The name Olukun is likewise a contraction that fully refers to the owner of the oceans and symbolises a persevering, stern, majestic force that complements the nurturing, forgiving capacity of Yemaya. The ocean we might see as a physical expression of subconsciousness from where springs creativity.

Initially you might not recognise or be able to identify the God/Goddess principle in this way – as Orisha. Furthering the push might eventually lead you there. But there has been an intuitive activation; the spiritual landscape is now open. There is no doubt that what you’re feeling is real. Your head feels light. You feel possessed by a quiet, yet demanding power. People randomly tell you that “you’re amazing” though you cannot see how or know why. But you are bursting with a remarkable aliveness which has evaporated foregoing trauma. It’s a secret, delectable sweetness that no politician, no pastor, teacher, counsellor, doctor, friend or lover has fed you. The awakening God/Goddess is a reclamation of your power. And it is all yours. There is but one crucial consideration –this reclaimed power will last only as long your readiness to make the serious commitment to meet the simplest or most extreme demands of spirit.
Posted by waywivewordzspiritualcreative at 10:14 No comments: